トップ > メモ > Who was excluded from the accessible restroom?

I had a little disappointing event, so I'll try to write it in English
I have taken the liberty of translating some of the tweets into English. If you believe that your rights have been violated, please contact me. I will remove it as soon as possible.
勝手ながら、ツイートの一部を翻訳させていただきました。自分の権利が侵害されていると思われる方は、私までご連絡ください。早急に削除いたします。

There was a plan to redesign a public toilet in Shibuya Ward, Tokyo.
tokyotoilet.jp

That one plan caught the eye of a feminist in Twitter.
It's Nanago Dori Park (7th Street Park)
It's a long, narrow and simple park along a big street.

The redesigned toilets are as follows.
tokyotoilet.jp 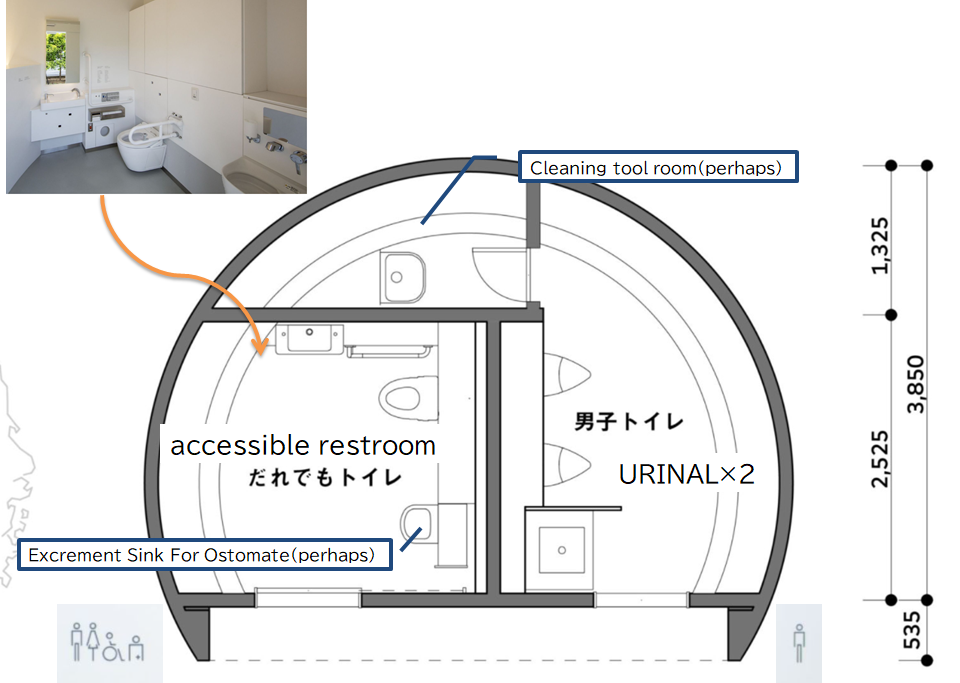 The Seventh Street Park Toilet is an advanced specification exclusively for men and people with disabilities. Public toilets in the park are dangerous for women, so no matter how clean they are, they cannot be used. So maybe it's graceful choice as a "Men's toilet".

It's amazing. The government has eliminated the women's restroom. And it shows a lack of female perspective. Does this mean that women should not go out?

I can't understand it. It's not for men only, and it doesn't prevent women from going out.
I disputed this.

Hmm. I see this excluding "males" from the toilets for everyone.

I misunderstood Cleaning tool room as a single toilet room.
@iltkwnaf said to me, "Are you an idiot?”
@lcp8LPiBbEqCbb8 said to me, "You have a terrible paranoia.”
The number of "likes" on those tweets was over 10.

This restroom is located in a long and narrow small park along the main road 7. There is also a large parking lot and a convenience store nearby. I think it is used infrequently. Male urine is fast and dirty. I guess they isolated the men's Urinals to keep the main toilet clean.
We don't have enough information to conclude that this facility favors men.

Some people said they needed three trays, one for women, one for men, and one for Accessible.
Japan's declining birthrate is depleting the country's strength, and resources are being depleted. We need facilities that are feasible and sustainable.

There were some surprising opinions.
Some people with disabilities were uncomfortable when users with children used an accessible restroom.

Please do not use the term "everyone's toilet."*1
There are many people with physical (or invisible) disabilities.
It is very uncomfortable to wait for a long time in front of a toilet in use and come out to find a mother or young woman with a child.
I want you to install a diaper switchboard and a change of clothes stand separately.
Please make it clear that this is a restroom for people with disabilities.

There are people who take the "accessible restroom" as a right for their own attributes and feel that their rights have been violated if they cannot use it comfortably.
Discrimination that is seemingly preferential is taken for granted by the person being discriminated against.
This problem is difficult.
In Japan, there are women-only carriages on trains, which women take for granted as their right.

I thought that what most women were upset about was not the design, but the fact that they could not use public restrooms without worry. Most sex offenders are men, and even though Japan is a relatively safe country, it is impossible to recover once you are a victim, so it is understandable to be overly concerned.
However, this problem cannot be solved by design alone.

This is seen in Japanese anime, manga, and other cultures where girls are seen as too much sexual content. Men are too indifferent to it. The Internet exacerbates them.
But every attribute has an outlier. As long as they don't commit crimes, I want them to be free. I am an outlier, too.

I had resisted using the "Accessible restroom" because of my discriminatory feelings. Ideally, everyone should use it together and help each other as much as they can.
I thought it was unavoidable for hygiene reasons that the men's urinals were segregated.
However, some people argued that there were no women's toilets, so women could not use them. Is there a feeling of resistance for a reason same as me?

I also saw the problem of physically challenged people perceiving the "Accessible restroom" as if it were their own right. Perhaps the absolute number of toilets is not enough.

In terms of crime control, I would recommend surveillance cameras. It may be costly, but without monitoring and control, there will be no peace of mind and safety.

www.japantimes.co.jp
I am in favor of the use of such technology.

Sex crimes have a high recidivism rate, and it's like an addiction, you can't stop it with your own efforts.
I know the pleasure of violating the dignity of those weaker than me with the power I have, such as violence and economic power.
I have no power, thank God.

As for the design of the toilet, I thought it was appropriate. If you are going to criticize it, you need user data, and it would be the responsibility of the critic to present it.
Security, which many people see as a problem, will not be solved by design alone. I'm just grateful for the bright and clean trays.